Towards the end of November, TAG will be running its first Kickstarter Project for Ultra Modern miniatures. 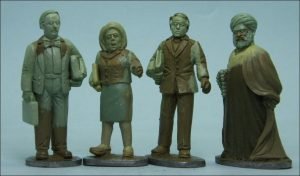 The nightmares  begin with another 4 Diplomats and Politicians, to accompany these that we released a couple of years ago.

These 28mm sized models, could double-up as anything, from humble IT staff, to crazed para-normal investigators, or many other non-military rolls in the 21st Century…

And if Politicians aren’t enough of a 21st Century Horror, then what about ‘The Mob’ that oppose them, street gangs, junkies, criminals, rioters, pinkos, hippies & communists, run amok in the streets…

Equipped with, ‘just whatever came to hand’ when it all kicked-off, this lot don’t really need anything, other than a BAD attitude, to stick-it to The Man.

These 12 miniatures will also be converted with Mask variants, in a similar way to our Organized Criminal Gangs, with more Clown masks, Vendetta masks, and maybe; gas-masks and hoods, or bandannas…

Finally, for now, a set of masked armed Robbers, pulling a heist in the middle of the mayhem.

These 4 minis, in a selection of the Clown and President masks, are loaded down with holdalls stuffed with folding CASH!