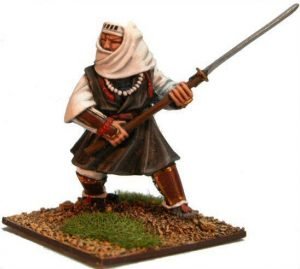 The TAG Asian range covers a huge time frame, but to be honest, it has one or two ‘issues’, so I’ll run through what we have, and I’ll point out where the problems are.

There are three major groupings in the range, which are;

Our  Japanese miniatures are for the Gempei War, in the late Heian period, although they will stretch into slightly later armies too, what changes in the late 1400s is the introduction of the yari, which none of our miniatures have.

Regardless of the end of the time frame, we have everything necessary for Japanese armies of this period; Samurai, Monks and followers.

The largest land empire the world had ever known, was conquered in the 13th Century by these nomadic horsemen, and we have a good range of all the troops necessary, varying degrees of armoured horsemen, and what little infantry the Mongols could round up.

Sculpted by Mauro Gnani with additions by Sue Wells

The TAG Chinese range covers three dynasties and about 1000 years, we have Tang and Sui for the 7th and 8th Centuries and the Song, from the 9th to 13th, from which point our miniatures combined with our Mongols are also good for the Yuan.

To be honest these aren’t the world’s greatest minis, and coupled with the problem that I appear to have lost the moulds for the Tang cataphracts, means that these are ‘probably’ the worst minis in TAG range…

On the other hand, I have been told that our Sui minis are the best in the world… so only you can judge.