It covers native Vietnamese fighters; the Regular, North Vietnamese Army and the irregular, so-called Vietcong, as well a full range of Americans and Commonwealth troops to accompany them.

The US involvement in Vietnam runs back to the early 60s, but it is with the start of the major offensives in the mid-60’s and early 70s that the TAG range concentrates.

We have US Army miniatures in large numbers, as well as a good selection of Special Forces.

Sculpted by Richard Ansell, with additions by  Sue Wells. 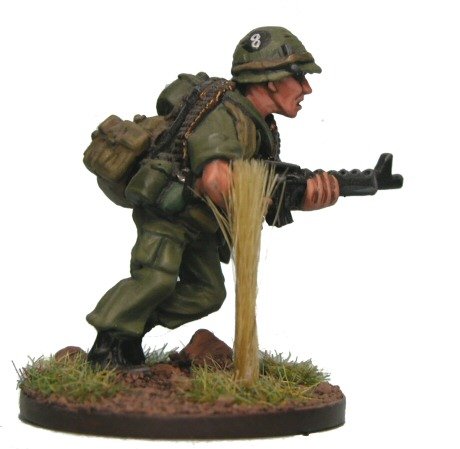 At its peak there were over 7000 ANZAC troops, in Vietnam serving alongside US troops for 1965 onward, and TAG minis represent these with the idiosyncratic weaponry and kit.

These are the minis that you’ll be needing to represent the great bulk of the North Vietnamese Army (NVA) at the height of the war in the l60s60’s and ear70s0’s.

All these minis have the distinctive uniform of the NVA with selection of helmets, as well as a large choice of weapons

Sculpted by Richard Ansell, with additions by Sue Wells.

Designed to represent the irregular fighting formations of the Vietnamese people, what at the time were termed Vietcong (VC). All of these miniatures are non-uniformed, and are bareheaded or have hats.

Sculpted by Richard Ansell, with additions by Sue Wells.