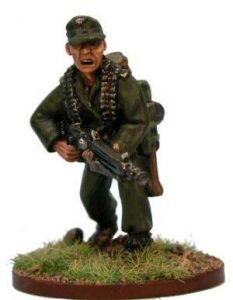 World War Two is perhaps the most easily accessible wargames period for beginners, the wealth of information available makes it an easy start point for those wishing to get started in historical wargames, but it is so grand in scope, that it offers serious gamers, many sub-periods and niche armies to inspire further development.

TAG’s WWII range splits into two distinct parts, primarily there is the war in the Pacific miniatures; Japan, American marines and the British for the Burma campaign, secondly there are a Late War miniatures, Russian and German for the final struggle to the death in the West.

TAG Japanese range is quite large, and covers everything you could need to represent the men of the JIA on the tabletop battlefield.

We have a good selection of basic troops, and all the major weapon types used in the 1930’s and 40’s.

The Marine Corps were the bulwark for the US forces used in  the Pacific from 1942 onward.

Again we have a complete range here, basic Marines with Garrand rifle, BARs, machine guns, everything necessary, as well as those little extra that add colour to a wargames table, Medics, snipers, flame throwers etc.

Britain in the Pacific

Britons war in Burma is one of many niche campaigns that may interest WWII gamers looking for new theaters. The range we have covers Chindit forces, the so-called Forgotten 14th Army, and the fearsome Ghurkas.

We have most of the minis necessary but in truth we could do with a couple of Command packs to fill out this excellent little range.

By TAG standards this is a pretty much unfinished range, we have 48 miniatures representing the basic Russian infantry types, for the late war period ’41-’45, with a full selection of riles and LMGs.

What we don’t have are Command groups and heavy weapons that are need to accompany the basic infant types.

With the recent addition of our German Command minis, his range is pretty much complete, maybe we could do with a mortar, or some more anti-tank weapons, but not much else is needed to fill out the army.

Also in this range we have 6 packs of Panzergrenadiere that don’t really fit in with the other 12 packs, these miniatures (LWG013 – LWG018) were sculpted in isolation from the others, are slight smaller and don’t use our standard weapons. They are mighty fine minis, but they ARE different to the rest of our range.