What I have Learnt about Swiss Flags of the mid-16thC 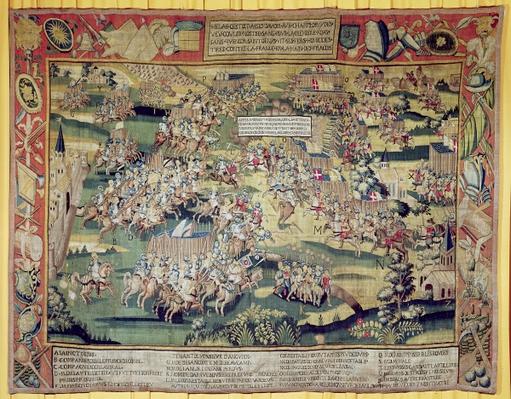 Well that was informative, thank you to all that posted, emailed or Commented, on the subject of Royal Swiss flags in the last 10 days or so…

When I asked, I figured that the answer might not be exactly straight forward, Regimental Histories, for this period before real long standing Regiments were formed, are a bit of a blank page in our history books, and so a little extrapolation and… *cough* reconstructive history *cough* are needed.

Firstly, size and numbers of banners, well throughout this period there are lots of banners in most infantry formations, one for every smaller contingent contributing to the larger formation, so one flag on its own is going to look a little incongruous… and the flags are big, twice the height of a man, and roughly square, carried on a pike staff length rod, rested on the floor. I haven’t seen any evidence for the smaller ‘Italian’ type, handheld wave-able banners.

Colonels who raised regiments, gave their own livery colours to the unit, and to the banner for the detachment raised. These banners could also carry the personal devices, heraldry, and mottos of their Colonels, sometimes with differing designs on opposing sides of the banners, so plenty of scope to add little items of interest and colour, to the many standards in a block.

The famous Swiss Cantonal flags of the late 15th & early 16th Centuries; with their images of Bulls, Bears, Rams, Keys etc. do not carry forward into this period, but the Swiss troops seem to have kept the traditional white Cross as part of their regalia through, and beyond this period.

There is evidence to suggest that the wavy lines of type I consider more familiar with the later Bourbon dynasty, may have originated here in the late 1570’s, but as this is a little to late for my Royal Swiss unit, hopefully I can quietly ignore it.

In research we (Mr Robin Shackleton) found that the Commander of the Royal Swiss was Anne de Montmorency, who coincidentally we have an unreleased model of sitting in the ‘To Do’ box here at TAG ShedQuaters

He, for it is a He, leads the French Royal Army, including the Swiss, at the battle Saint-Denis in 1567 at the age of 74, but dies two days later of wounds sustained.

His Livery colours include a mid-blue and a bright yellow/gold, and the Wikipedia shows the heraldry as that shown here…

He also had a icon/motto, a sword and cloud, with a suitable Marshall Latin phrase to accompany him into battle.