Spanish Imperial Infantry on the Workbench 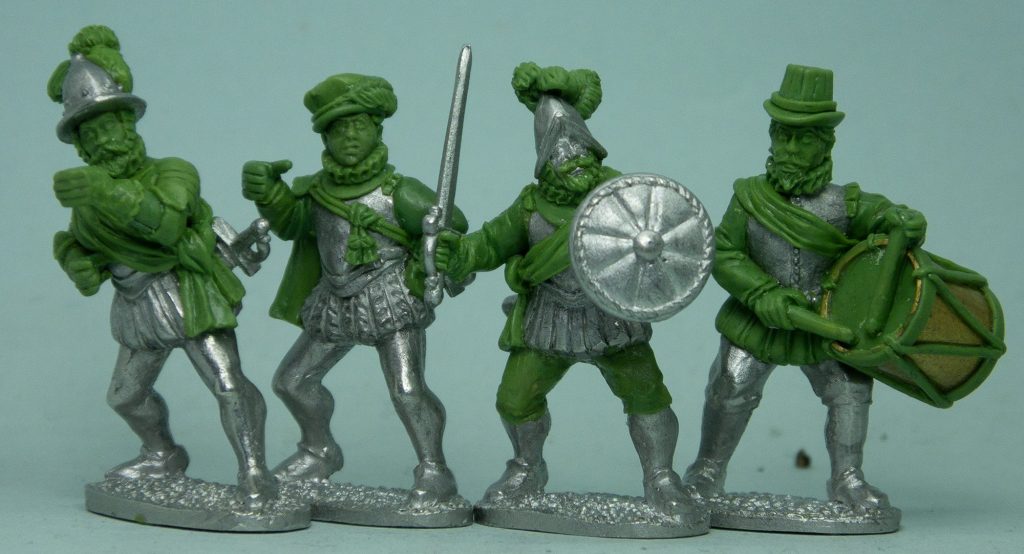 The huge Spanish Tercios of the mid to late 16th Century, were probably the biggest infantry formations ever to take the field in Continental Europe.

Primarily the Tercios were pike armed.

In this period, service in the infantry was an honorable, and profitable, path thorough life for Spanish Nobles.

Many younger poorer men would start in the rear ranks as Pica Seca (simple pikemen), and literally progress though the ranks.

These new minis have lighter amours in the rear ranks, with a larger proportion of soft hats and caps, as head gear.

Whist the further forward the more men have full suits of proofed-steel back & breastplates. Many with pauldrons, tassets, and of course, a good number of the classic crested morions, for which these troops are famous.

But pikemen are only half the story with the developing Tercios.

As the Century progressed an increasing number of men were equipped with fire-arms.

At first these were Arquebusiers, but later many would have the heavier Musket, used with a forked rest.

Men in this period dressed for battle as they would in day to day life, so these minis wear civilian dress of the late 1560’s to 1590’s.

Lots of tall felt hats, countless varieties of low soft-caps, capes, worn on & off the shoulder, starched ruffs, and stuffed over-pants with peas-cod doublets, make these infantry distinct, from the Colonellas of the early 16thC, and the semi-uniformed men common to the late Thirty Years War.

These excellent 28mm miniatures, all of which were sculpted by Nick Collier, will be on sale exclusively, through the TAG web shop on Wednesday the 25th of September 2019.