Late Landsknechts in Pluderhosen, added to the Workbench 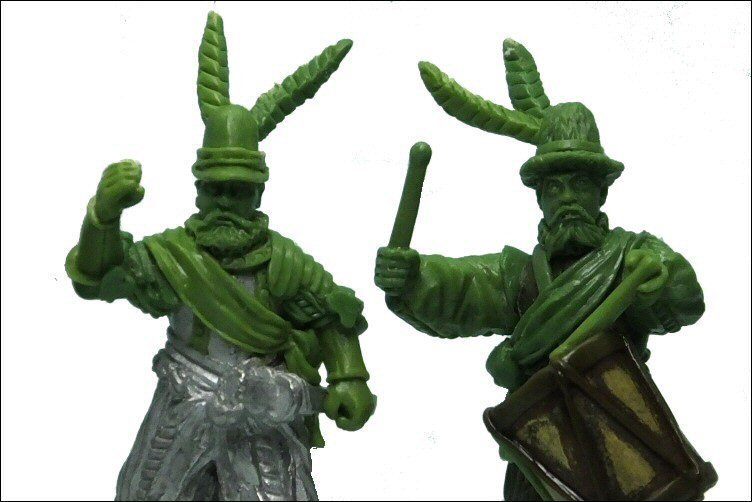 Landsknechts have been something of theme of the last few TAG Renaissance Releases.

Firstly, 18 months ago, we announced the Release of our Early period ‘Sknechts for the Wars of Emperor Maximilian in the early 1500’s. Then last summer, we added the Landsknechts archenemies, the Swiss, for the middle period of the 16thC…

Now we prepare to release 9 new packs (36 minis) of Landsknechts in their last phase of development, for the later part of 16th Century.

Sometime around the middle of the 16th Century Landsknecht dress changed; fattened on wages and plunder, these ultimate mercenaries, whose personal dress was allowed to become flamboyant, under Maximilian I in the late 15thC, had become almost ridiculously extravagant by the 1550’s.

Simple slashed tights were OUT….

…IN were expensive, silk and worsted, Pluderhosen (harem pants), worn under much more armour than had been used in the earlier periods.

Landsknechts remain primarily pike armed though-out the the 16th Century, but the percentage of arquebusier with-in the units increases, as the weapons become more effective on the battlefield.

To reflect these mixed units, TAG will release; 4 packs of Pikemen, 16 minis, in our usual ‘bristling hedgehog’ of poses, 3 packs with Arquebusiers, 12 minis, and 2 Command groups, 8 minis to represent the core Colour Parties commanding these huge formations.

These Landsknecht minis have pikes at four different angles, with the rear ranks (85°/75°) having lighter armour than the front two ranks (65°/45°).

The armoured front-rank models all have helmets, mostly a mixture of morions and burgonets, where-as in the rear ranks, some soft felt-hats are worn. Extra sculpting work has also gone into the armours. Tassets mostly worn by the front-ranks, have be ‘tweaked’, and all the arm/shoulder armours are different though-out, making all theses minis individuals.

Shot troops were on the increase in most infantry formations by the middle third of the 16th Century. Pike Keils in the Maximilian era had been been accompanied by a few men armed with handguns and crossbows. Now Landsknects mercenaries with arquebus, could be hired as readily as their pike armed equivalents.

We have Arquebusiers in three poses, firing, advancing with arquebus at port, and marching. All have soft felt-hats, of which there seem to have been almost endless varieties of in the16thC.

There are also a huge number of variation of neck wear, some men preferring a ruff, others have a more ‘turned down’ short collar.

We hope that like these minis as much as we do.

There are some truly great TAG models shown here. We think, that it is in these last few packs shown, that we can start to glimpse what Nick Collier, the sculptor of all these models, is planning for our forthcoming, Dutch and Spanish ranges. It’s a mouth watering prospect…